ABC NEWS: 'Young and the Restless' alum Victoria Rowell returns to soap operas, but in a new

Victoria Rowell, best known for playing Drucilla Winters on "The Young and the Restless," has returned to the world of soap operas, but this time in a very different role.

The 58-year-old actress has created a six-part series called "The Rich and the Ruthless," in which she also stars as aging soap star Kitty Barringer, who is trying to make her comeback as Blue Sylla (sound familiar?) in the industry's only black-owned daytime drama.

The new show, which streams on the Urban Movie Channel, a subscription service started by BET founder Robert L. Johnson, pokes fun at soaps but also addresses a very real problem about their lack of diversity.

"The lack of diversity behind the camera was never lost on me," Rowell told ABC News. "It inspired me to write two novels from a black perspective behind-the-scenes."

Those novels, "Secrets of a Soap Opera Diva: A Novel" and "The Young and the Ruthless: Back in the Bubbles," form the basis of the new series.

They also served as a creative outlet for Rowell who was outspoken about the lack of diversity at CBS's "The Young and the Restless" and later sued the network and the show's producers in 2015 for what she said was retaliation for speaking out.

At the time, CBS dismissed the lawsuit as having "no merit" in a statement to ABC News.

Earlier this year, Rowell withdrew and settled the lawsuit, according toThe Hollywood Reporter.

But Jamey Giddens, a longtime soap watcher and co-founder of the popular website and podcast Daytime Confidential, said the problem of lack of diversity in daytime drama persists.

"Each soap has three to four black characters in play but they never get the strong, meaty stories that their white counterparts get," he said. "These characters will get serviced, then back-burnered for say, six months."

The main issue, though, is what happens behind the camera, Giddens said.

"There have not been as many writers in the writers' room telling these stories. There are two, maybe three black writers across the board," he said, adding that since the start of daytime dramas, all the way back to the days of radio, there have only been a "handful of black writers, directors and producers in this genre that is beloved by black families."

Giddens credits Rowell with calling attention to the lack of diversity in soap operas and establishing the Winters family on "Y&R."

"Vicki has long been one of the most vocal critics, and it cost her a lot of punishment for speaking out and saying what needed to be said," said Giddens, who is also a co-writer of "The Rich and the Ruthless."

Rowell has brought in a multicultural cast, including "Law & Order" alum Richard Brooks, to the "black-owned, black-led and black-streamed" Urban Movie Channel.

"I am very, very grateful to the fans and the supporters who never stopped encouraging me to create my own content, especially in this genre," Rowell said. "Why shouldn’t we have our own content?"

The response to the show has been so great that UMC has already approved a second season.

"Look for more of the Barringer family drama or lights, camera, calamity and claws," Rowell promised.

SheKnows.com: Not only is she creating a new show, she's creating opportunities for black actors

The Undefeated: ‘Being Mary Jane’ star Richard Brooks is taking on more and starring in new show ‘Th

Essence Fest 2017: The Rich and the Ruthless Makes Noise

Victoria Rowell Returns to Y&R for A Celebration of Kristoff St. John

Life Is A Soap Opera: Catch Victoria Rowell’s The Rich And The Ruthless! 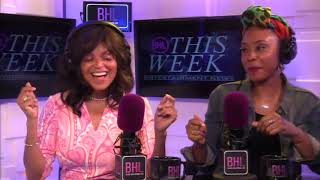